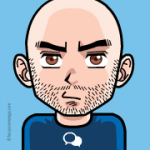 So on the new update, the game asks you to open Radiology before Laboratories. Nothing wrong with that, but for people like myself who only hire interns it now makes the game unplayable.

For me to open Radiology I need a technologist with the Radiology specialization. None of my technologists will have the Radiology specialization until they level up. Between 30% and 90% of patients visiting my clinic are requesting X-ray. Something that I can't provide until a technologist reaches level 2. As a result, I have to turn away more patients than I treat, dropping prestige, dropping the number of patients that visit and the potential payout from each patient and so ultimately losing me money.

In the required time to level up a technologist, I become so far overdrawn that it would take me twice as long to get back into credit, thus making it not worth my time to play. So firstly a question... Why did the order change? As there's a natural progression with levelling up staff surely the department with no requirements should be the first one to open. Can someone change it back please so that I can enjoy the new update and the things that have been added into the game and new challenges without feeling like I don't want to play anymore.

So I've let the game run for 50+ days now. I'm seriously in debt and can't find a way of making the money back. Prior to the update, I was running the same hospital and found it easy to make even small amounts of money by using the loan and then watching as money rolled in. By the time I came to hospitalize cardiology I was using my own money. The change in order of the insurance objectives here really makes a difference to anyone who only uses interns. The 20+ days that it takes for a technologist to level up in the early game really takes it toll on funds. It also drops my morale as I don't achieve anything and even much later on when I have a 24 hour emergency clinic and hospitalization, a 24 hour general surgery clinic, radiology and laboratories I'm still losing money and it's kinda no fun to play now.


I don't really want to play with the no building costs but I honestly don't see any point playing at the moment with the objectives ordered, in my opinion, incorrectly. Switching Open Radiology and Open Laboratories would make all the difference. It would stop patients coming in for X-Ray's too early and give you a chance to level up a technologist ready for when you really need it.

Hi, thanks for the detailed breakdown, we had a quick discussion about this and might have some suggestions.

But first, let me clarify: the diagnoses which patients show up with and the examinations they need do not depend on whether you have labs or radiology open, as soon as you start accepting emergency patients, some of them will need an X-ray or a lab test to confirm the diagnosis. But yes, the cost of building an X-ray room that you won't use for a while still counts.
Also, in your playthrough are you actually blocked by not being able to open radiology because you don't want to hire the lvl. 2 technologist or have you hired & fired one just to progress? Other than that the order shouldn't really matter.

One thing that we can suggest when playing with this specific approach would be to speed up the levelling process - feel free to for example double the following values in ProjectHospital_Data\StreamingAssets\Database\Tweakables.xml

So, in the game I was playing, my progress wasn't blocked. But as I only hire interns I had to wait around 24 days for a technologist to level up to have the Radiology Specialization. I chose not to hire anyone above level 1 in any department as I feel it adds a nice dimension, allows me to hire who I want, and gives me a progression. Doctors that start in the Emergency Clinic as level 1 can then move onto being an On Call Doctor in Emergency, or they can move to the General Surgery Clinic or any of the remaining 4, they can move to Intensive Care. The same as those Doctors can progress when they reach level 4. They can become Surgeons or Anaesthesiologists in their chosen field. Nurses can move Triage or to become Surgery Nurses. Technologists can then move to a speciality. The problem is that in those 24 days my bank balance becomes a huge negative number. Even once they had levelled up and the objective complete, as well as the next objective to open Laboratories the damage was already done. Taking out a loan to build the next required thing made no impact other than to increase interest payments and so push me further and further into the red. The problem itself isn't the patient requirements, the problem is the imbalance of requirements. In the picture above, all 19 untreated patients asked for x-ray. Now granted, I could have "cheated" and just looked at the required department for each possible diagnosis and chosen the only diagnosis that pertained to Emergency, however I feel that defeats the object of what is, an absolutely incredible game.

Before Update 1.1 the objectives order saw you take on the lab before the x-ray. My method of hiring interns, taking out a loan to build and then letting the game run, paying back the load and allowing time for staff to level up before taking out a loan to build the next thing worked perfectly fine. Come mid game I would be paying off the loan in days if there was a loan at all. And this was with buying all the cheapest furniture and little decoration to upgrade and improve at a later time. Unfortunately, with Update 1.1 it's very very difficult to continue that. I've started many games and played each one slightly differently, how much I build to start, how many staff I have but they all end the same. Massive debt while I wait for the technologist to level up and the disproportionate number of people requiring x-ray. I won't claim it was everyday, some days I would treat 20 people and only have to leave 2 or 3 behind. But most days, the number of times I had to stop to send someone wanting x-ray elsewhere far exceeded that of the number of people I could treat.


I do have a question though... " the diagnoses which patients show up with and the examinations they need do not depend on whether you have labs or radiology open ", if that's the case, why do I not have people needing abdominal surgery at my clinic?

I love this game, I have in the region of 500 hours playing it so please don't think I'm being negative about the wonderful game you've all made, I just wanted to get my point across that I believe the order does make a difference. It makes sense to me to ask players to open Emergency first rather than Cardiology. All 5 specialist departments require a minimum level 2 Doctor, Emergency does not. I believe the same should be true for the Technologists. Labs don't require a specialization and so are the best place to start.

Thank you for listening

Hi, no worries, this is appreciated and we'll try to find some solution - switching the order of the objectives is actually possible (and you're right there's logic to it as labs have lower requirements than radiology), but I'm afraid it's actually not the main problem here. If you'd like to try it on your side, we can show you how to change one of the XMLs and we can also consider updating this in the next minor patch. And - I just double-checked, labs aren't actually locked by the objective, it just postpones the financial reward, you'll get it after opening radiology.

"the diagnoses which patients show up with and the examinations they need do not depend on whether you have labs or radiology open ", if that's the case, why do I not have people needing abdominal surgery at my clinic?

The diagnoses that spawn are actually linked to Emergency, General Surgery, IM, Orthopaedy, Cardiology and Neurology and to which of these are open in the hospital (not radiology and not labs). There's a secondary distinction of which diagnoses spawn when you only have clinic at the department they belong to, so you don't get complicated traumas if you only have the clinic open. The interesting bit is that this hasn't changed between the versions - but there might be other changes that have an effect though:

And, lastly, feel free to upload your save, it could be useful for us to have a quick look. 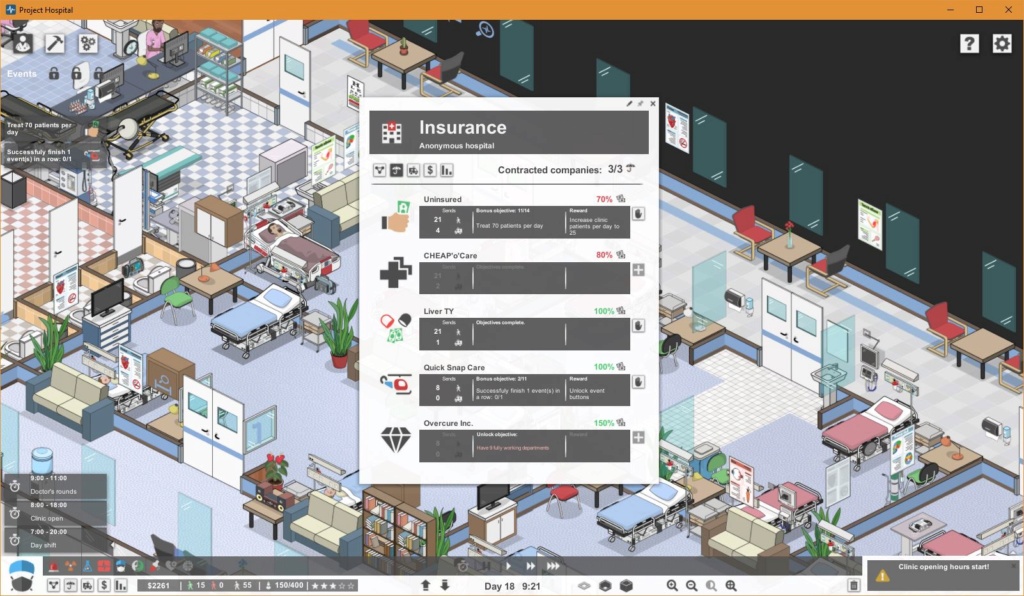 Hi, the previous objective unlocked random events, triggering events via the buttons up top will get unlocked after completing one random event.

jan.oxymoron wrote:
Hi, the previous objective unlocked random events, triggering events via the buttons up top will get unlocked after completing one random event.

Thanks for the clarification