I have fourteen clinic rooms on emergency. Currently, three of my doctors are calling patients. The rest are 'idle' and my waiting room is full.

The 'more floors' mod was causing a conflict. 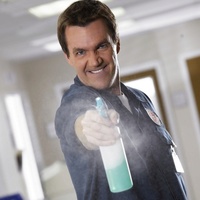 How so? Curious as all the mod does is change one number in the tweakables file.

I have seen devs confirm/suggest more floors mod as the reason computers and sinks don't appear on items properly. I'll try to find the original post.

The reason I'm sure it was more floors is:

In the midst of the problem, I removed the mod. The problem cleared up straight away, and it hasn't occurred since
The bugged out doctors were 'obsessed' with a patient that had gone to testing (these patients remained on the doctor's card after similar patients had gone from the non-bugged doctors cards, even though they were all still in the hospital). My labs are on another floor to the clinic. They had to change floor and that seemed to cause the doctors to get 'stuck'

I also found the post I was talking about. No dev involvement, my bad, but a user called 10pastnein posted a bug report called 'Graphical Issues', talking about computers bugging out on desks. They removed the ....... more floors mod and the problem went away (which is a problem I was also having, with computers and sinks looking weird). Evidently, the mod is affecting more than just the number of floors. Although I thoroughly agree, that seems such a weird thing for it to interfere with.

Still, out of the many people using the mod only a couple have reported any issues it seems. I'd suggest there may be another factor involved.

Probably. All I know is, game wasn't working properly, removed the mod, and now it's fine.


I don't think the 'more floors' mod was responsible in this case, there's really no way for it to affect the behavior of patients. It's possible that there are still some cases where just reloading the game can fix some issues (unfortunately these are very hard to track).


On the other hand the mod can indeed explain the issues with object rendering (we're aware of people running into it, but we had no luck reproducing it on our side). It makes some sense though, as when there's a wider "depth range" of the camera, it loses some resolution when it comes to distinguishing which of two objects on top of each other is closer to the camera. Let's see if we can use this hint and finally fix it now.