I found out just now that I have a patient who died after three consecutive respiratory failures. For some reason, ICU never used the treatment Artificial Ventilation. I tried at first to remove said treatment in case it got stuck. The result was over and over Respiratoy Failure until she died. 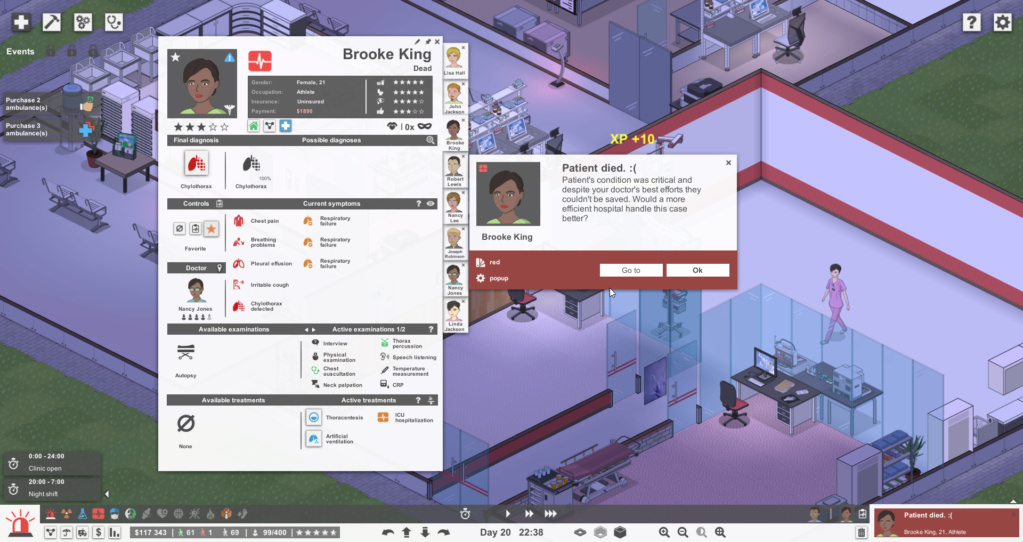 It was wierd because doctors and nurses around her were idle playing solitaire in their computers hahah.
And the patient wasn't even transported to the treatment that got her into failure (Chylothorax). The name is Brooke King.

I have attached the log, the savegame with the moment she died and the autosave from 10 minutes earlier. In the autosave you can see her lying on the floor of the Internal Med Dept. Is the one with the green shirt!

I'll try to load the autosave to see what happens. If I have any other news or details I'll come back here.

Update: I managed to do a workaround when I loaded the autosave. She got sent to the TC and got stabilized. After that I added more doctors, nurses and another Procedures Room to speed up her treatment so she never got to the ICU. Previously it was constantly placed under another guy that had the same condition, even when I removed his code blue.

Hello again!
I kept playing the same Hospital and I had another case with the same characteristics. She has a case of Pleurisy (not the same case of last time) and as you can see it's in ICU waiting to be stabilized. The doctor in charge in ICU has status "On Standby for critical patients" and the Artificial Ventilation treatment never takes place. This time I kept watching what happens:
For the second Respiratory Failure the doctor comes near the bed, does something with the hands but the Artifical Ventilation never turns orange.

I couldn't upload the savegame because it says I exceeded total storage space. Let me know when I can delete any of the other files because, if you need to, I have the exact point where this thing is happening, before I took any actions to it.

Btw, something I forgot to mention: I have some mods but they are all aesthetic. Nothing modifies how the game goes. Let me know if you need the list of mods. 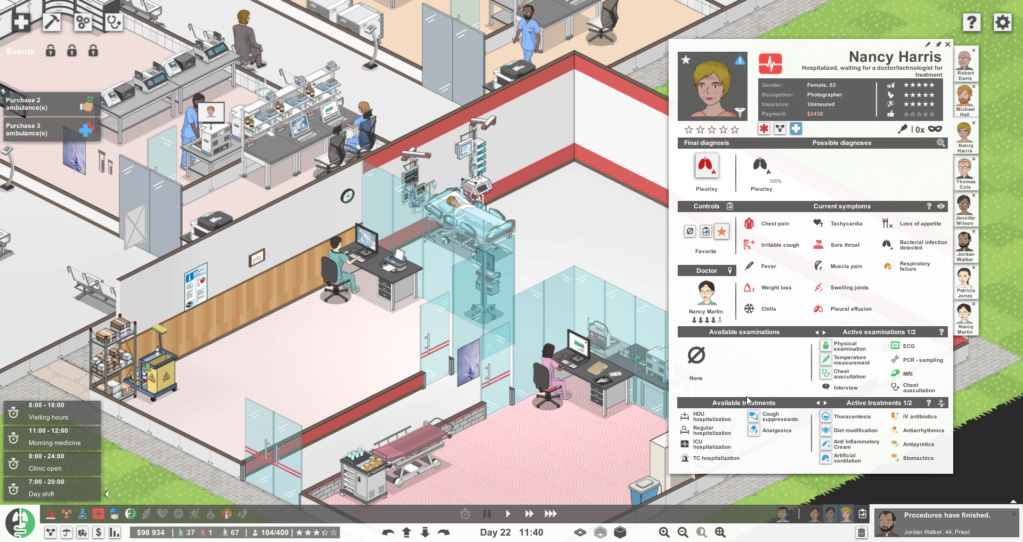 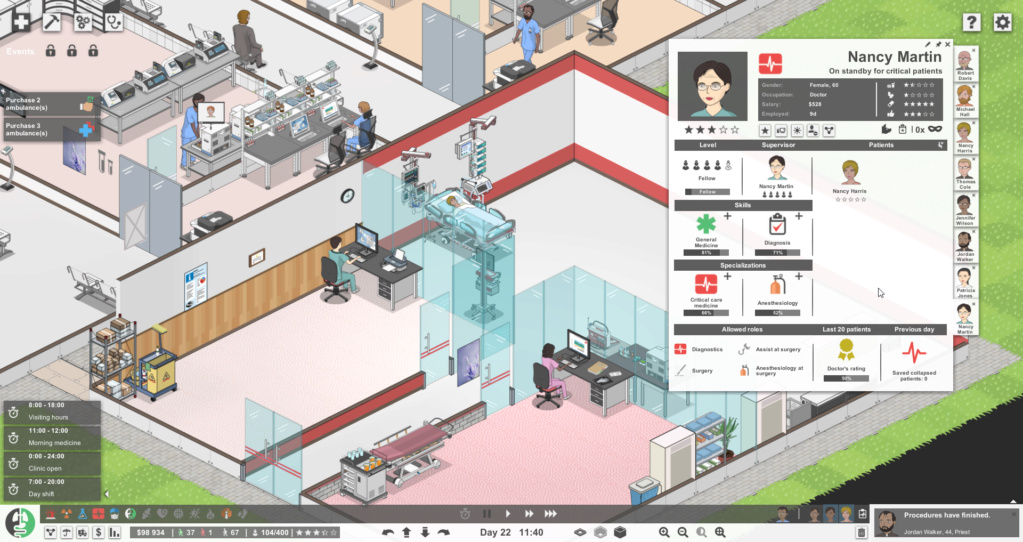 Hi, happy new year and thanks for the detailed report!

I managed to load the saves even without installing the mods (there are some objects missing, but it doesn't seem to have an effect on how the hospital runs), but on my side, when I load the autosave and watch the patient go to the ICU (selecting the diagnosis by hand is needed), everything works as expected and all treatments work.
Looking at the screenshots from the other save, it seems that the cause isn't the ICU, but the unit at internal medicine, as the patient is waiting for Thoracentesis. The treatments are done in the order they're on the list, so you can probably take the patient over and cancel other treatments than artificial ventilation to get it started. But, if I'm not mistaken, it's the Thoracentesis treatment that actually stops the further collapses, so capacity at Internal Medicine will be the key here.

Hey hey! Happy New Year to you too!
Nice to hear back so quickly

I'm glad you could load the saves.

- Also, the first time this happened, trying to solve it the Respiratory Failures were consecutives: bam, bam, dead. There was no time for the game to pick up the patient.

- I have another savegame that I couldn't upload that has a patient with the respiratory failure and that you can remove the thoracentesis, if you want to play around with. I couldn't load it here to this post because it warned me of exceeded storage size. But this savegame would be like in the middle of the issue, so you can see that the patient is not being stabilized even when removing the Thoracentesis.

- I do understand, and what happened with other patients, is that they got stuck in that state: not being stabilized. I let that be, without toucking anything. So at some point they were picked up for the Thoracentesis, and then the Respiratory Failure stopped after the treatment, but not because of the Artificial Ventilation. It just stopped.

So maybe my question is: the artificial ventilation cannot happen unless the Thoracentesis is performed first?

Hi, thanks for the details! Btw, I've managed to clear a bit of space here on the forum by deleting old attachments, so feel free to upload the second save you mentioned, I'd be happy to have a look at what exactly is happening.

It's interesting that your observations are different to what I've seen on my side in the original save, but generally no, the artificial ventilation shouldn't be dependent on Thoracentesis, on the other hand it won't stop the further collapses on its own as it's the Thoracentesis that deals with the root cause. Also, when a patient is controlled by the ingame doctors, they basically insist on Thoracentesis being done first, that's why I mentioned I needed to switch the patient under player control to be able to change the order.

Hello again! Sorry I took so much time, I forgot to check the forum again.

Here's the savegame I was talking about. You have the camera right in the ICU.

You have many options to play this out: keep removing the Thoracentesis and Ventilator until the consecutive crash.
You can see it play itself out (though you might need to add a few doctors and nurses to speed the Thoracentesis bc that's what I did at that time).

Let me know if you need more info. I remember I let it play itself out, and that's what I do every time one of those ventilators "get stuck".

Let me know if I can be of asistance any further

Hi, no problem at all, thanks for the updated save!

Letting it play out, I basically keep seeing two outcomes (there's a bit of randomness as expected): either the patient gets treated in time, or collapses once, gets stabilized and treated after that. No stuck artificial ventilation after about 7 tries. :/

I think we have a couple of options what to still try on your side:
- Unsubscribe from the workshop content that's used in the save and try to see if anything changes - the new decorative objects will be missing, but the game should run and this should tell us if this was causing the difference in behavior after all
- If this doesn't help, it would be great if you could load the save once more, let it run until the issue shows up again and then upload a fresh log file, if there's a hidden error happening behind the scenes, we should find more details there

Ok, I finally made two things...

I recorded a video to show how I played it out. I was able to do a workaround in which I manually play the patient and I am the one providing the ventilator and it worked. But as I tried to demonstrate in the video, I keep removing the treatment to see if eventually the patient is stabilized automatically. It is not, so I turn to play it myself and I give the ventilator. No doctors rush in and it's like just magically fixed.

I attached the log of this as well. Now I'm going to let it play out by itself without intervention from my part. I might have to add a few doctors probably to help rush the procedure but nothing else.

BTW: seems like PROBABLY it was just a coincidence that the second failure happened when I removed the ventilator, you'll see in the video I tried it a bunch of times and didn't work. But the first time it happened consecutively I was doing that.

This is the other scenario where I let it play out. The thoracentesis is made first and then the ventilator.

For this one I had to upload a video to YouTube. https://youtu.be/-tQcyjpZ7HM
It will take a while to upload tho. I'm hoping by the time you see it it's alredy there.

Anyway. Let me know if I can be of any more help!

Thanks for the patience

oh sorry, I forgot: also here's the log that it makes by just opening the savegame, without any resolutions or anything. Just the savegame load.

Hi, thanks for the updates! Having had a look at the videos, to me both basically show the game working as expected. Here's a couple of comments though to try to point out some details:

In the video uploaded to the forum I can see the game re-adding your cancelled Thoracentesis, as it considers it to be the most critical treatment that needs to be done immediately. As I mentioned in one of the previous posts, if needed, you can override this by switching the patient from "Favorite" to "Controlled by Player". Both Thoracentesis and Artificial ventilation treat a critical symptom, but Thoracentesis is the one that will prevent further collapses - these will happen as long as the patient has an untreated "Pleural effusion" symptom (this is the one cured by Thoracentesis).

Then, the video on youtube shows how it works without intervention, the treatments are performed in the order they're in the card, but I guess it can get a bit hard to follow when the list expands to two pages.

Does this all make better sense now?

ahahhah ok, cool! I get it.
It just seemed weird, because I thought that the ventilation would hold the patient while waiting for treatment, like an aid. but if everything is a-ok and it's how it's supposed to work, then great

Thank you so much for the patience!!